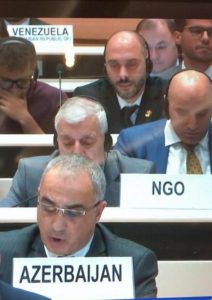 Organized by the Office of the United Nations High Commissioner for Human Rights, the 11th Session of the UNForum on Minority Issues has been held in Geneva, Switzerland.Azerbaijan was represented at the event by Head of the Department of Interethnic Relations, Multiculturalism and Religious Affairs of the Presidential Administration of Azerbaijan Etibar Najafov, and Second Secretary, Permanent Mission of the Republic of Azerbaijan to the UN Office and other International Organizations in Geneva Marziyya Vakilova-Mardaliyeva.Addressing the session under the motto “Root causes and consequences of statelessness affecting minorities: preventing statelessness through a human rights approach”, Etibar Najafov described the statelessness as a negative factor. He noted that the statelessness limits some rights and freedoms of people, adding that representatives of racial, ethnic and religious minorities suffer from this problem in many countries.

Etibar Najafov underlined that the government of Azerbaijan approaches to the aforementioned problem within the context of its multiculturalism policy.“Azerbaijan’s multiculturalism policy creates ample opportunities for ensuring fundamental human rights and freedoms of stateless persons. This is of crucial importance from the point of view of stateless persons’ integration into society and their obtaining citizenship. Starting from 2008 up to now 1,529 stateless persons obtained Azerbaijani citizenship,” Etibar Najafov said.Addressing the forum’s “Statelessness resulting from conflicts, forced population movements and migration affecting minorities: main challenges and possible solutions” session, Etibar Najafov emphasized that among the stateless persons there are Azerbaijanis who were expelled from their native lands as a result of Armenia`s policy of aggression and ethnic cleansing against the country, and those who lived in the former Soviet republics for a while.