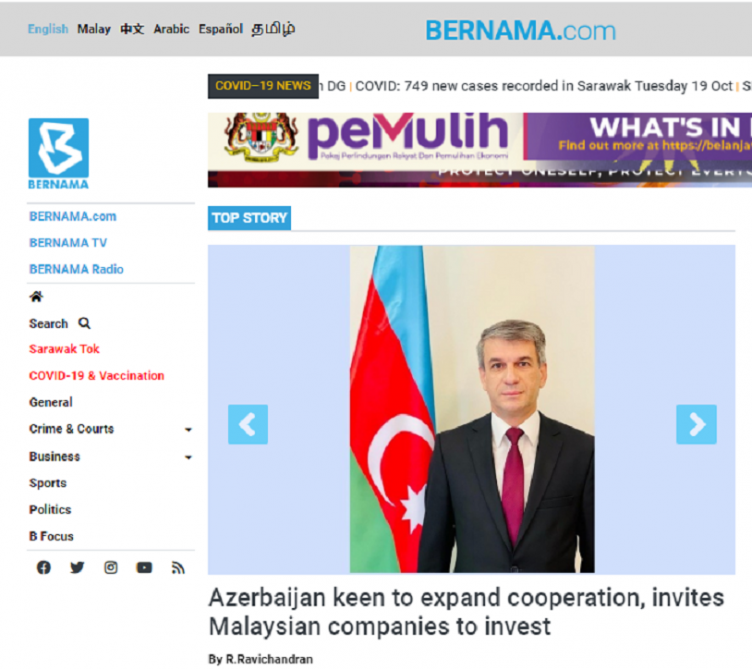 The Azerbaijani diplomat, in his interview, invited Malaysian companies to participate and invest in the country, including in the liberated territories, especially in renewable energy, information technology, food processing, infrastructure development and tourism.

He said the Azerbaijani government is currently undertaking restoration and reconstruction in the territories liberated during its 44-day war with neighboring Armenia, adding that there is greater opportunity to participate in these projects.

“These liberated territories have been declared as zones of green economy and green energy by President Ilham Aliyev. It means that all projects to be carried out in these areas will be following policy of ‘green technology’. The President of Azerbaijan has made it clear that this policy aims at integrating wind, solar and wind energy resources of liberated territories to provide sustainable development,” Davudov emphasized.

The Azerbaijani Ambassador also spoke about the Alat Free Economic Zone (AFEZ), the Baku International Sea Trade Port, that are more attractive for foreign investors, as well as the modern infrastructure created by the Azerbaijani government for export-oriented economic initiatives.

Noting the multifaceted nature of Azerbaijani-Malaysian relations, Ambassador Irfan Davudov mentioned that the two countries have great potential for cooperation in many areas, including science and education. The Azerbaijani diplomat who has already visited Universiti Teknologi MARA (UiTM), said Malaysia has reputable public universities. “We can explore ways for cooperation such as exchange of student and lecturers and joint research programmes like in the area of scientific research”, he said, adding that UiTM could explore the possibility of opening a branch campus in Azerbaijan.

“Our political relations are at high level. We must do our best to enhance the level of cooperation in the field of economy, culture and people-to-people relations,” Davudov added.