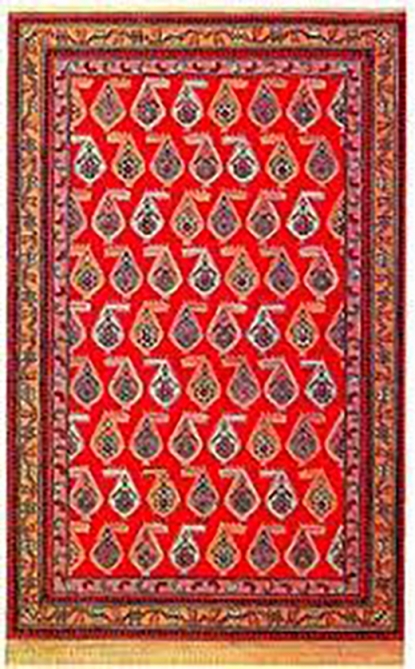 The Karabakh carpets known under the name of Karabakh were and are still made at all carpet-weaving workshops across Azerbaijan. Depending on the location, the carpets were given different names but the art experts referred to all of them as Karabakh. This composition of the carpets, woven in Susa in 19th century for sale at Istanbul bazaars were given various names of Khan or Khan Karabakh, whereas the carpets woven on the basis of the same design in Guba were named Africa.

There are several types of the Karabakh carpets:

1. The composition of the central area that consists of several medallions mainly resembles the ornamental fabric of Iran and India, especially the curtains made of printed cloth. These medallions decorated with foliate elements can also be encountered on the Koran’s cover and on the jackets of the books designed by the Tabriz artists in the 15th-17th centuries. The titles in the upper and lower parts of the medallions fill the empty spaces between the medallions in the central area.

2. There are also Karabakh carpets that are referred to by carpet makers as Cini-cesni. The composition of these carpets is formed by octagonal medallions lined up in a row.