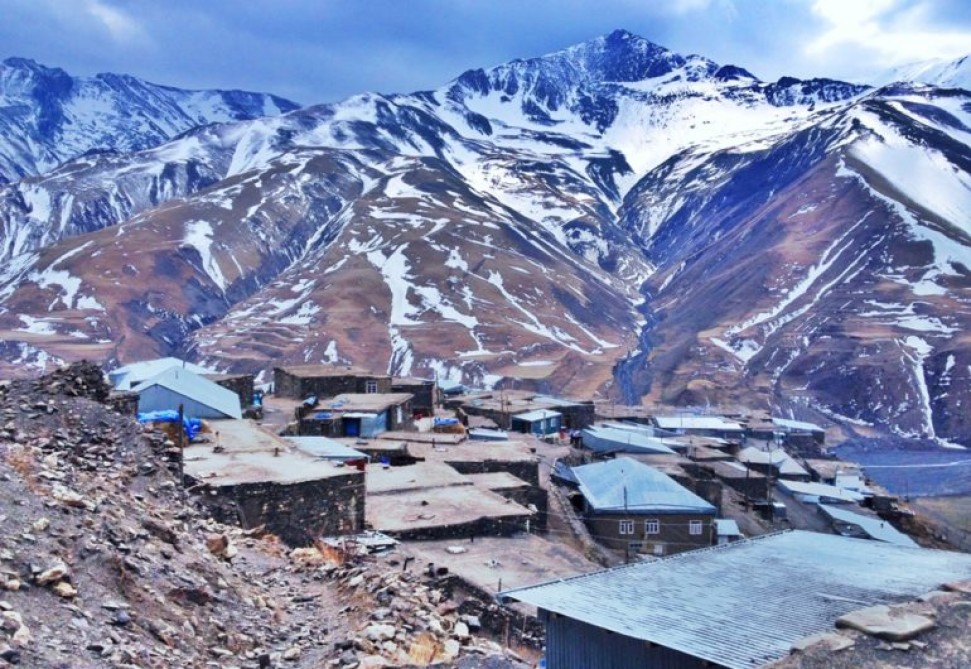 Khinalig is the ancient village in Azerbaijan. The village is located an hour drive along a new road from Guba city. Khinalig has developed its own culture and traditions, and even its own language. The village is over 5,000 years old. For centuries, this village was cut off from the rest of civilization by the tall mountains and dangerous rocky cliffs. Due to the isolation, the villagers were able to preserve their own unique language, which doesn’t belong to any other language family, as well as their traditions and customs, found nowhere else.

There are about 2,000 people living in the village, divided into 4 families. Each family has its own graveyard and its own patterns for carpets and clothing. The villagers of Khinalig build their houses one on top of the other. In general, they resemble a multi-story house, where the roof of one house is the courtyard for the one built above it. There are 360 stone houses in the village, each of which is about 200-300 years old.

The residents of Khinalig are very religious. There are a lot of holy places not far from the village, such as the graves of saints, caves, and unexplored archaeological sites. Some of them were built as early as the Middle Ages. Dedicated explorers can find the Khydyr Nabi Tomb, Sheikh Shalbuza Mosque, Abu Muslim Mosque (12th century) and the Pirdzhomyard Mosque (1388). The local culture is preserved in the Historical and Ethnographic Museum of Khinalig, where visitors can find items used in traditional life and small exhibits about the history and customs of the local villagers.

With the construction of a new paved road in 2006, local life changed a lot. Tourists started visiting, and locals got a chance to leave the village. They buy goods in Guba, and trade homespun items, food products, and host and feed tourists who want to get to know this unique village. Khinalig became a little less isolated, though it still retains its unique character. In 2007, Khinalig became a state historical, architectural and ethnographic reserve.