One killed, two seriously wounded in land mine blast in Aghdam region 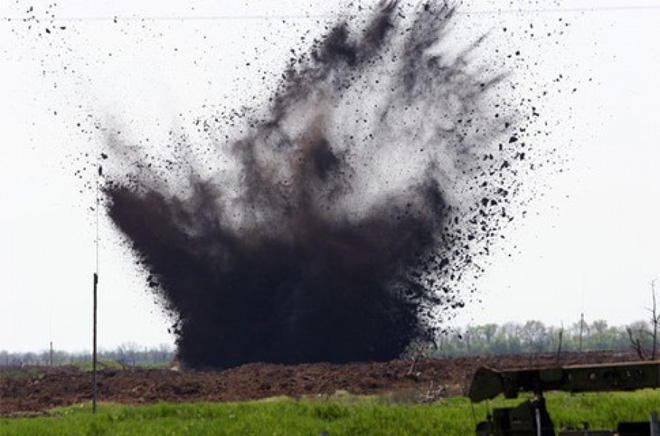 One has been killed and two people have been wounded in a land mine blast in Aghdam district in Azerbaijan’s Nagorno-Karabakh region, which was liberated from Armenian occupation on November 20, the Azerbaijani Prosecutor-General’s Office and the Interior Ministry said in a joint statement on December 14.

“At about 1700 on December 13, 2020, a serviceman of the Defence Minisrtry ‘s military unit N, residents of Aghdam region Togrul Vilayat oglu Ahmadov, born in 1984, and Elchin Ganboy oglu Mammadov, born in 1990, were hit by an anti-personnel land mine while being in the area of Aghdam region’s Shabulag village liberated from Armenian occupation.  As a result, Elchin Mammadov was killed, the serviceman and Togrul Ahmadov were seriously injured,” the statement said.

A criminal action was taken against the case under Articles Nos 100.2, 120.2.1, 120.2.12 of the Azerbaijani Criminal Code. An investigation into the case was entrusted to the investigation department of the  Prosecutor-General’s Office.

Prosecutors and police officers are taking operational measures over the case. The Prosecutor-General’s Office and the Interior Ministry once again warned the population against continuing unauthorized visits to the territories liberated from occupation until they are cleared of mines and explosives.

The Azerbaijani Prosecutor-General’s Office earlier reported that four people were killed in a mine blast on the territory of Fuzuli region on November 28.

Senior Azerbaijani officer Colonel Babak Samidli was killed in a mine blast in newly-liberated Sugovushan settlement on November 23.

Some 100 Azerbaijani civilians were killed and hundreds of others injured in Armenia’s armed attacks between September 27 – November 10.

On November 10, Azerbaijan and Armenia signed a Russia-brokered peace agreement to end the war in Nagorno-Karabakh.