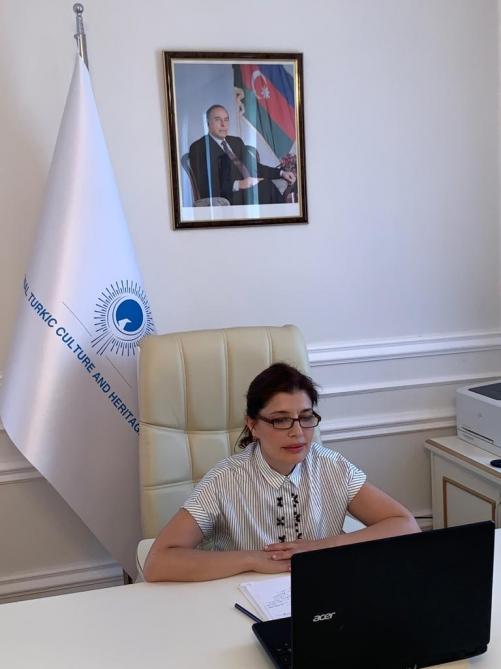 President of the International Turkic Culture and Heritage Foundation Gunay Afandiyeva has taken part as an honored guest in the video conference “Makhtumkuli and the Turkic world.”

Co-organized by the Embassy of Turkmenistan in the Republic of Azerbaijan and the Institute of Literature named after Nizami Ganjavi of the Azerbaijan National Academy of Sciences, the conference was attended by the heads of international and public organizations, diplomats, representatives of the scientific and creative intelligentsia of Azerbaijan and Turkmenistan.

The President of the Foundation praised the personality and work of Makhtumkuli Fragi.

“Makhtumkuli occupies an exclusive place not only in literature, but also in the public and national consciousness of Turkmens. Absorbing the philosophical feelings of Ahmed Yasawi and Yunus Emre, the great classics of the Turkic world, Makhtumkuli, with his public literary morality and national worldview, opened a new era in Turkmen poetry “, said Afandiyeva.

She stressed that the Turkic national thinking is fully manifested in the creative activity of the poet, and the poetry of Fragi grows from a single Turkic root.

Paying attention to the importance of promoting the work of a great thinker, the President of the Foundation noted that the study, research and publication of the poet’s valuable heritage is of great importance for the development of literary and cultural ties between Turkic-speaking countries and the promotion of a common Turkic culture.

Gunay Afandiyeva also reported that the International Turkic Culture and Heritage Foundation is preparing an anthology of poems “Giants of the Turkic World”, noting that the poems of Makhtumkuli are also included in this book.

The event was attended by the heads of international and public organizations, diplomats, representatives of the scientific and creative intelligentsia of Azerbaijan and Turkmenistan.