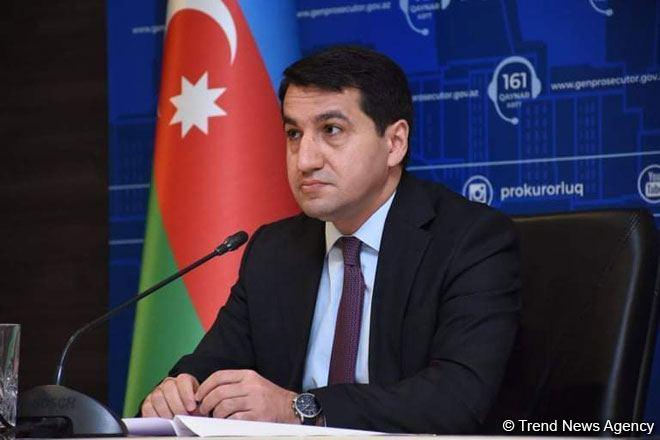 Azerbaijani presidenial aide Hikmat Hajiyev has said that within 27 years of occupation, Armenia had conducted urbicide to Aghdam city.

On November 28, Hajiyev visited Tartar and Aghdam regions along with foreign diplomats and members of the Karabakh football club. Aghdam, which was occupied on July 23, 1993, was vacated by the Armenians on November 20, 2020 under a trilateral agreement signed by Azerbaijan, Russia and Armenia on November 10, 2020.

“Aghdam – vivid illustration and recognition of urbicide. Genocide against cities. Within 27 years of occupation Armenia truly and wholeheartedly conducted urbicide to Aghdam,” Hajiyev said on his official Twitter account on November 29.

Hajiyev later tweeted: “After perpetrating such vandalism to cultural and religious heritage of Azerbaijani people in occupied lands including in Aghdam, Armenia doesn’t have even moral authority to speak about civilized attitude and cultural values.”

Posting photos of destroyed buildings in Aghdam, the presidential aide said: “Magnitude of destruction in ‘Hiroshimo of the South Caucasus ‘- Aghdam. Luckily Aghdam did not sustain nuclear attack. But damages  and looting it has been inflicted by Armenia  throughout 30 years of occupation is worse than a nuclear bomb. Vivid recognition of urbicide.”

Posting a video from the scene, the presidential aide also commented on the desecration of the tomb of Karabakh Khanate founder Panahali Khan.

“Tomb of Panahali Khan founder of Karabakh Khanate was subject to pillage and looting and used as stable for animals along the tombs of [Azerbaijani Turkic khans of Karabakh] Ibrahim Khalil Khan and Mehdigulu Khan Javanshir in Aghdam city of Azerbaijan,” Hajiyev noted.

Hajiyev posted a video of renowned photojournalist Reza Deghati, who shares his memories about the Khojaly genocide. Deghati, for the last three decades, has worked all over the world. His assignments have taken him to over a hundred countries as a witness to humanity’s conflicts and catastrophes. His work is featured in the international media – National Geographic, Time Magazine, Stern, Newsweek, El País, Paris Match, as well as a series of books, exhibitions and documentaries.

“Famous French photographer @REZAphotography through lenses of his sad memories with diplomatic corps in events of 1992 in vicinity of walls of Aghdam Mosgue. 28 years later standing at the position he communicates his personal emotions with his timeless photos,” Hajiyev said.

The presidential aide also posted the video of a young Mugham artist performing in Aghdam.

“Famous Karabakh Shikastasi Mugham is back to land of Karabakh again. A young singer today performed in front of destoyed and pillaged Aghdam Cultural House. Karabakh is about thousands years old cultural and civilizational heritage of the Azerbaijani people,” Hajiyev said.

Commeting on his visit to the region also with members of the Karabakh FC, Hajiyev wrote: “Glad to be with Karabakh Football Club team members in de-occupied Aghdam. Karabakh footbal club was the only one in exile like refugee and IDP. They are now back to their home town,” he wrote.

The presidential aide posted the video of himslef playing football with the Karabakh FC members.

“Spirit of football was brought to Imaret Stadium of Aghdam. Karabakh footbal club is back to its native city after 27 years of longing for return to Aghdam,” Hajiyev said.