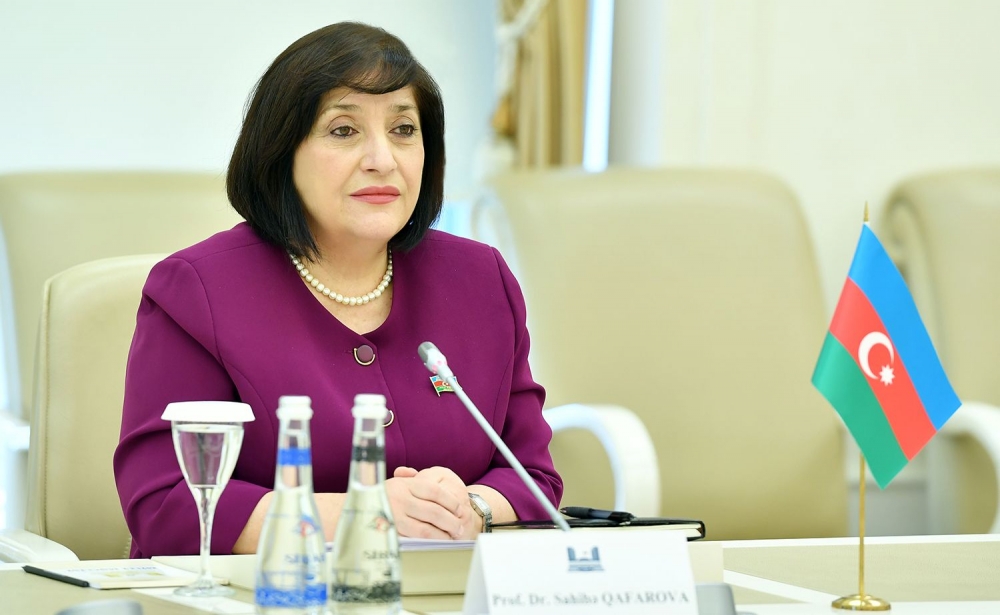 Speaker of the Azerbaijani Milli Majlis Sahiba Gafarova has met with a delegation led by Secretary General of the Council of the Inter-Parliamentary Assembly of Member Nations of the Commonwealth of Independent States (IPA CIS) Dmitry Kobitsky.

Speaker of Milli Majlis Sahiba Gafarova said that Azerbaijan cooperated with international entities in general and with the IPA CIS in particular adding that the Azerbaijani MPs are actively involved in international events expressing their country’s position on the various issues discussed.

Speaker Sahiba Gafarova touched upon the liberation of the Azerbaijani lands from the Armenian occupation following the 44-day Patriotic War and the destructions wreaked in those provinces. “The Azerbaijani side wishes to talk about peace and future development today. Unconditional adherence to the trilateral statement of 10 November serves the common interest of the countries of the region and Azerbaijan is pinning high hopes on the region’s future,” Gafarova said.

Speaker Gafarova hailed the work done by the International Institute for Monitoring Democracy Development and Parliamentarism, and Suffrage Protection for Citizens (IIMDD) and its Baku Branch. “The Baku Branch traced intently such political processes in the CIS as elections and referendums; it joined in monitoring them and brought to the table its input in the study of the relevant international experience,” Gafarova pointed out.

IPA CIS Council’s Secretary General Dmitry Kobitsky expressed satisfaction with his delegation’s visit to Azerbaijan and with what they had observed here. He said that the organization finds it very important to deepen its relations with Azerbaijan. “The active participation of the Azerbaijani delegation at the IPA CIS congresses and Azerbaijani MPs’ contribution to drafting model laws mean that the high-level cooperation and relations between the Assembly and the Milli Majlis are on the rise,” Kobitsky said.

The Secretary General said that during the current visit, the delegation of the Assembly have familiarized themselves with the arrangements at the new office of the IIMDD Baku Branch, as well as talked to the branch employees and inquired about their activities conducted there. He also pointed out the close cooperation between the Institute’s Head Office and its Baku Branch.

Director of the International Institute for Monitoring the Democracy Development (IPA CIS IIMDD) Ivan Mushket shared his views on what the Institute plans to do jointly with its Baku Branch eventually.

Head of the working group for Azerbaijan-Russian inter-parliamentary relations Nizami Safarov, Head of Parliament’s Apparatus Safa Mirzayev, Deputy Secretary General of the IPA CIS Council/Special Envoy of the Milli Majlis of Azerbaijan to the IPA CIS Aydin Jafarov, Director of the IIMDD Baku Branch Teymur Muradov and other officials also attended the meeting.