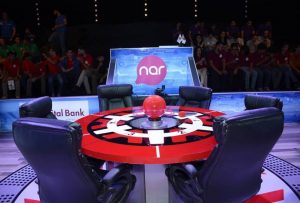 The twelfth season of “Brain Ring” intellectual competition, traditionally supported by Nar, being the operator that attaches a special importance to promotion of education, science, culture and enlightenment, came to an end. A total of 32 teams, representing 17 regions and 10 higher education institutions of the country participated in the competition.

The ‘Kapital Bank’ team became the winner of the traditional ‘Knowledge’ cup of the ‘Brain Ring’ intellectual competition. Note that the winner of the first half of the year and owner of the “Nar” cup was the “Full Goychay” team.

A special contest has been organized for TV audience during the broadcast of ‘Brain Ring’ intellectual games. Thus, those viewers who became first to send the correct answers to questions, at the Twitter account of Nar during the broadcast of the games, were awarded with special gifts. This way, the ‘Brain Ring’ fans were provided with a great chance to view this intellectual contest and win prizes from Nar operator at the same time.