Zhara Music Awards to be held in Moscow 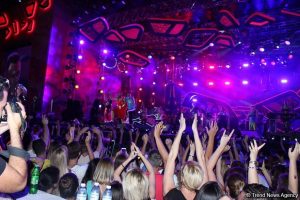 Zhara Music Awards will be held at Crocus City Hall in Moscow on April 5.

The prize will be awarded for the second time for musical achievements in 2018,  Trend Life reported.

For the first time the award ceremony was held in 2018 with a full house.

This year the music award will be special. The winners are chosen by the 100 most popular people, including singers, theater and film actors, producers, athletes, TV hosts, as well as viewers of Crocus City Hall on the air.

It depends on them who deserves to receive the highest rating and become a winner in one or another nomination. That is why this is the most objective musical award.

By the way, each summer since 2016, music lovers gather in Sea Breeze Recreation Center, to share a universal love of music at Zhara International Music Festival.

Zhara is an international music festival that takes place every summer in Baku, on the coast of the Caspian Sea. Four days of concerts, painted in unique sunset colors, star parties and film premieres, as well as tens of thousands of spectators and millions of viewers.

The third festival ZHARA was held on July 26-29, 2018 at the beautiful resort of the country’s capital Sea Breeze. Popular pop stars from Azerbaijan, Russia, Ukraine, Italy, U.S., Kazakhstan, Moldova and other countries took part in it. During the four days of the festival more than 250 artists performed on the stage.

The festival will be held for the fourth time in Baku on July 25-28.

The opening of the festival will take place on July 25 with a gala concert, at which famous artists will perform their hits.

Pop stars of 90’s will delight music lovers on July 26.

Best singers of the 2000s will perform on July 27, while the most fashionable young artists will close the festival on July 28.