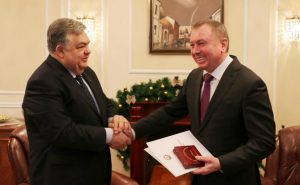 Azerbaijan’s Ambassador in Minsk Latif Gandilov has met with Belarus Minister of Foreign Affairs Vladimir Makei to discuss prospects for cooperation between the two countries.

They exchanged views over a broad range of issues regarding various areas, including the bilateral economic relations and prospects for future cooperation between Azerbaijan and Belarus.

Ambassador Gandilov emphasized the importance of President Ilham Aliyev’s official visit to Belarus in 2018 in expanding bilateral relations between the two countries. He hailed the meeting of the intergovernmental commission on trade and economic cooperation held on the sidelines of this visit and the signing of bilateral documents at the meeting.