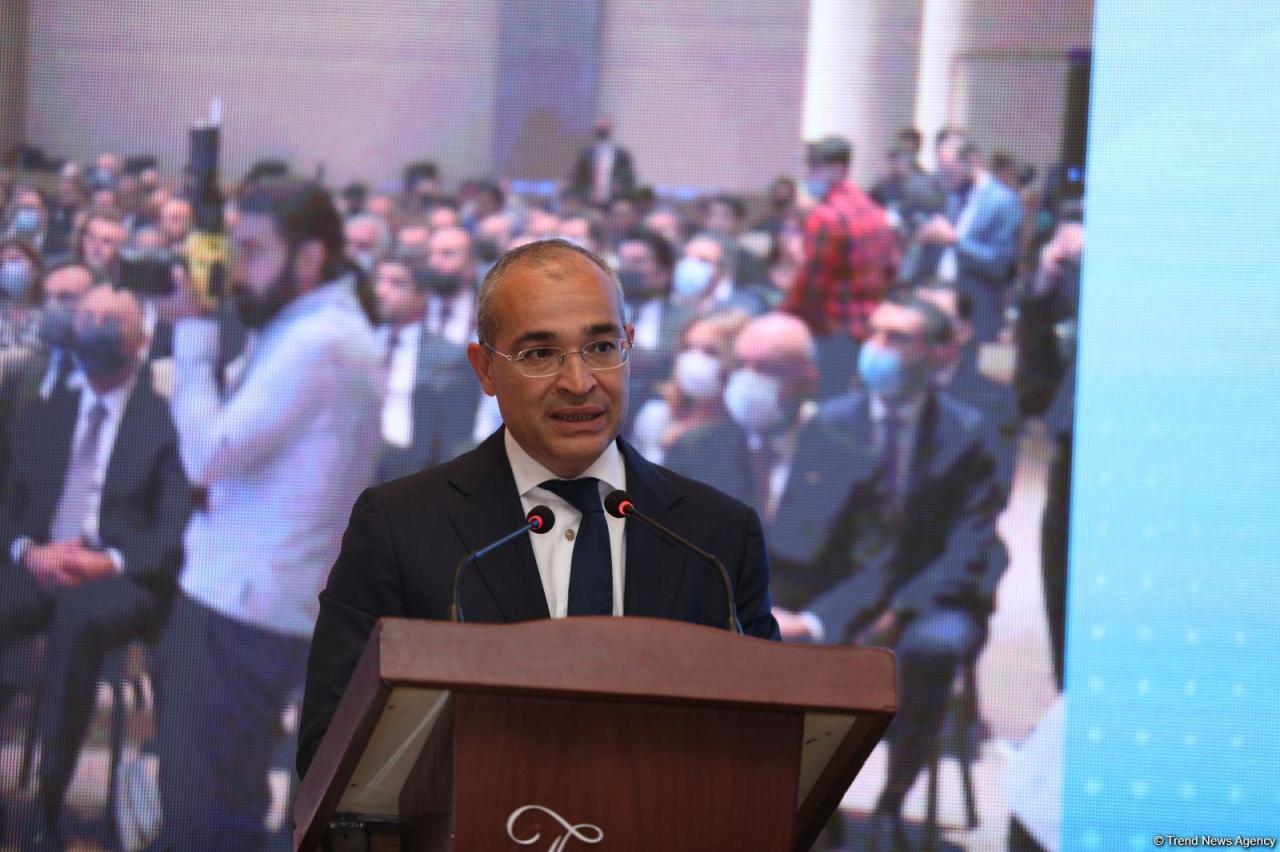 Economy Minister Mikayil Jabbarov has said that Azerbaijan is preparing a program to increase export potential in the sphere of public and private partnership, Trend has reported.

He made the remarks at the “Role of entrepreneurship in economic development” conference dedicated to Entrepreneur Day on April 25.

The minister noted that this will help create new jobs, and simplify the procedures for buying and selling state property at auctions. He added that the new program is also being prepared in the financial sector to simplify the access of entrepreneurs to financial instruments.

“I want to note that today it is necessary to increase investments in local entrepreneurship. I am sure that this program will contribute to this,” he said.

Noting that the country’s economy has grown dynamically over the past 18 years, Jabbarov stated that in the reported period production has grown by four times and agriculture by two times.

He added that for decades, the government has done a number of works to encourage entrepreneurial activity, increase investment potential and expand the number of financial instruments.

“Despite the negative consequences faced by the Azerbaijani economy, today we continue to take measures to accelerate economic growth,” he said.

The minister stated that since early 2022, the economy, foreign exchange reserves, and other macroeconomic indicators have been showing dynamic growth.

Emphasizing that the economy’s development is closely connected with the small and medium businesses development, he noted that in order to support SMBs, the government creates conditions to simplify their entry abroad.

National Confederation of Entrepreneurs of Azerbaijan President Mammad Musayev stated that the share of the private sector in the sphere of entrepreneurship in the country is 84 percent.

He noted that the fair, organized in Icherisheher, dedicated to the Enrepreneurs’ Day in Azerbaijan, can be considered one of the largest in the post-pandemic period.

He said that not only businessmen from Azerbaijan but also from Ukraine, Belarus and some other countries are participating in the fair. Musayev added that Azerbaijan actively promotes its products abroad.

“As you know, our country is known in the world as an oil exporter. However, Azerbaijan has recently been actively promoting non-oil exports, and today we are witnessing rapid growth in the export figures of these products,” he said.

Moreover, MP Tahir Mirkishili recalled that over one million businessmen and over 150,000 legal entities have been registered in Azerbaijan so far.

“Such an increase in the number of business entities was facilitated by the programs and activities carried out by the Azerbaijani government,” he said.

Mirkishili stated that more than 650 production facilities have been created in Azerbaijan since the early 200s, which significantly increased the share of production and industry in GDP.

He added that the appropriate programs are being developed in Azerbaijan to incentivize and encourage business.

Azerbaijan’s Small and Medium Business Development Agency Board Chairman Orkhan Mammadov noted that about 1,100 applications have been received for participation in projects in the country’s Karabakh. He underlined that 390 of the total number of applications are from foreign companies.

“It is well known that the territory of Karabakh is rich in natural resources and minerals, has great potential for the development of tourism, agriculture, processing and other industries,” he noted.

Furthermore, he mentioned that the agency’s activity is aimed at creating new organizational models and promoting entrepreneurship in accordance with new challenges.

“Given that SMBs account for 99.6 percent of economic entities operating in Azerbaijan, then, of course, sustainable development of the country is closely related to the level of development of SMBs,” he said.

Mammadov noted that the agency provides support to SMBs in Azerbaijan’s 35 regions and more than 20 support centers operate there.

“We are actively working to expand tools to support and finance SMBs. Our agency issues relevant certificates to innovative entrepreneurs, which exempt them from income tax for a period of three years,” he said.

The board chairman also mentioned that the total turnover of micro-entrepreneurship entities increased by 31 percent, small businesses by 79 percent, and medium-sized businesses by 139 percent, as a result of purposeful activities of the Azerbaijani government in 2021.

Additionally, speaking at the conference, Labour and Social Security Minister Sahil Babayev stated that the number of employment contracts in Azerbaijan has increased by 400,000 up to 1.7 million, while the average wage by 2.5 times, over the past three to four years,

“Labor contracts in the country today are concluded entirely in electronic form. Various electronic systems have been created and continue to be created to simplify relations between an employee and an employer,” he said.

Babayev noted that the ministry is working on the preparation of specialized programs in the sphere of advanced training of workers. He added that a unified database of vacancies is also being created, where the unemployed can find an appropriate job.

The minister also said that the pandemic unemployment assistance was provided to 300,000 families in Azerbaijan, necessary payments were made and support was provided and continues to be provided to the families of martyrs and war veterans.

Previous Iran FM: U.S. must show courage to correct past mistakes by removing all sanctions
Next US Deputy Assistant Secretary to visit Azerbaijan