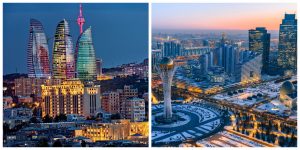 Azerbaijan and Kazakhstan have both been named some of the best destinations to visit, according to the 2018 National Geographic Russia Traveler Awards. The magazine based its rankings on travelers’ opinions of the countries they visited.

Azerbaijan, located on the western shore of the Caspian Sea, ranked third amongst destinations for culinary tourism. Uzbekistan, located in Central Asia, outshined all others to grab the top spot in this category, while Italy was ranked second.

According to the United Nations World Tourism Organization, nearly 90 percent of world travelers design their itineraries around food and culinary events. Azerbaijan, which is rich in culinary delights, attracts millions of tourists each year. The local cuisine has managed to remain unique despite blending elements from Turkish and Iranian kitchens.

Azerbaijani dishes are known for their abundant use of seasonal vegetables and greens, including eggplant, tomatoes, peppers, beets, radishes and cabbage; and meats such as lamb, beef, and chicken. One of the country’s best-known delicacies is black caviar, sought after worldwide and produced from sturgeon found in the Caspian Sea, which makes seafood an important part of Azerbaijani culinary identity. White sturgeon, Caspian salmon, sardines, grey mullet and a white fish called kutum are all popular amongst seafood lovers. Foodies who plan their vacations around exploring new gastronomic experiences can enjoy different culinary tours to picturesque regions, like Gabala and Sheki located in the north.

Kazakhstan is attractive for those loving winter extreme sports, including alpinism, snowboarding, skiing, and sledding. Belukha Mountain, the highest peak of the Altai mountain range, is a sight to behold. With a height of 4,506 m (14,784 ft), this mountain is a climber’s dream and is home to nearly 170 glaciers.

Shymbulak and Medeo ski resorts, located high in the mountains of the Ili-Alatau range, are also worth a visit. Shymbulak is open all year round and offers guests a variety of activities, including biking, mountain climbing, paragliding, buggy riding, and excursions with a professional guide.