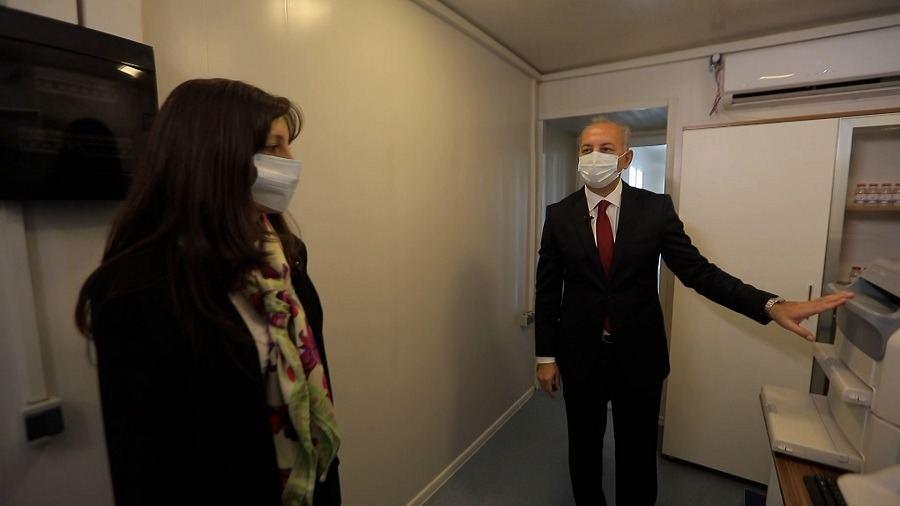 Azerbaijan has launched a new modular hospital in the liberated Shusha city, the State Agency on Mandatory Health Insurance on October 14.

Deputy Chairman of the Agency Nigar Bayramova described the hospital as the next step taken to improve the health infrastructure in the country while familiarizing herself with the conditions created there.

“The installation of the hospital makes medical services accessible to the population. Citizens will be able to use medical services free of charge within the Compulsory Medical Insurance Package,” she stressed.

Head of the hospital Fazil Almammadov informed Bayramova about the created conditions and modern medical equipment that will serve the examination and treatment of citizens.

“The hospital is equipped with a centralized oxygen generator system. There is an oxygen line in the operating and intensive care rooms, as well as in all wards. The hospital will provide emergency medical care, polyclinic, laboratory, functional diagnostics, anesthesiology-intensive care, and inpatient services,” he stressed.

Almammadov added that the functional diagnostics room is equipped with a portable X-ray machine. General and biochemical analyzes can be performed in the laboratory of the medical institution.

Azerbaijan allocated $1.5 billion for the reconstruction of the liberated territories in 2021. In particular, these funds will be used to restore the infrastructure (electricity, gas, water, communications, roads, education, health, etc), as well as cultural and historical monuments.

Shusha, which was occupied by Armenian forces on May 8, 1992, was liberated from Armenia’s occupation on November 8, 2020. The city, which played a critical role in liberating Karabakh, is located on the road to Khankandi, the region’s largest city.

A Russia-brokered ceasefire deal that Azerbaijan and Armenia signed on November 10, 2020, brought an end to the 44-day war between the two countries. The Azerbaijani army declared a victory against the Armenian troops. The signed agreement obliged Armenia to withdraw its troops from the Azerbaijani lands that it had occupied..