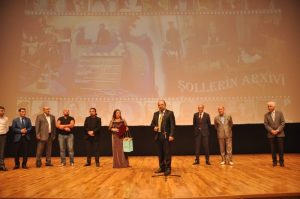 The film, “Sholler’s Archive” is dedicated to the 200th anniversary of the resettlement of German colonists in Azerbaijan and was screened on the special order of Azerbaijani President Ilham Aliyev. The film gained five gold medals so far and narrates a story of the German colonist and his family, who moved to Azerbaijan.

Note, at the beginning of 19th century, Germans from Europe and Germany were moved to Azerbaijan. Their role in history of Azerbaijan was outstanding.

Also during World War II, 22, 841 Germans were exiled to Kazakhstan and Siberia. One of the families were the Shollers. And Mrs. Sholler gave her granddaughter, who was 6 months old, to an Azerbaijani family due to the harshness of the conditions of exile.

The film received a certificate of excellence in filmmaking at Mediterranean Film Festival Cannes 2018 in France.

According to the producer, the film will play significant role in cultural relations between Azerbaijan and Europe.

Mediterranean Film Festival Cannes highlights a selection of best films from around the world.

In the film, starring are Ajdar Zeynalov, Shirzad Pirallahi, Ramiz Valiyev and others.