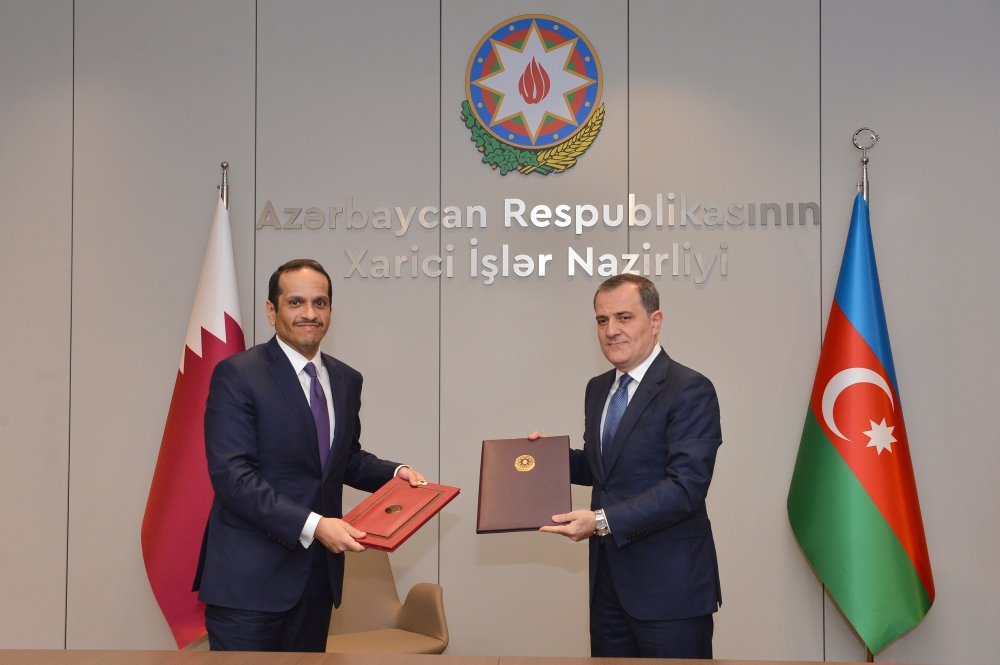 During the meeting, held with the participation of delegations from both sides, the sides exchanged views on the agenda of bilateral cooperation between the Republic of Azerbaijan and the State of Qatar, as well as regional issues.

Minister Jeyhun Bayramov noted that Azerbaijan attaches great importance to the development of relations with the State of Qatar, hailing the high-level political dialogue between the countries. Emphasizing that the two countries share relations of friendship and cooperation at both bilateral and multilateral levels, the FM thanked Qatar for its continued support for Azerbaijan’s just position on the settlement of the past conflict based on the international law.

Deputy Prime Minister and Minister of Foreign Affairs of the State of Qatar Sheikh Mohammed bin Abdulrahman Al-Thani noted that the meeting with the President of the Republic of Azerbaijan was very productive. He expressed his satisfaction for being in Azerbaijan in a very important day for the country and conveyed his sincere congratulations on the 30th anniversary of the Restoration of Independence of Azerbaijan. Minister Sheikh Mohammed bin Abdulrahman Al-Thani once again reiterated Qatar’s support for territorial integrity of Azerbaijan.

FM Bayramov broadly informed his counterpart on the current situation in the region, including post-conflict development in the region, implementation of tripartite statements and measures taken by Azerbaijan in this regard, acts of systematic destruction committed by Armenia on the Azerbaijan’s territories during the nearly 30 year-long occupation, attempts to erase the traces of Azerbaijan’s historical, cultural and religious heritage, as well as illegal activities, massive contamination of territories with mines and other issues. He also highlighted the restoration and reconstruction works carried out by the government of Azerbaijan in the liberated territories.

The sides also discussed issues of expanding cooperation between the two countries in the fields of economy, trade, mutual investment, including alternative energy, transport links, tourism, as well as the use of existing potential. It was noted that the holding of a meeting of the Joint Economic, Trade and Technical Commission between the Government of the Republic of Azerbaijan and the Government of the State of Qatar during the current visit would make a positive contribution to the development of bilateral economic relations.

Previous Israel and Azerbaijan are great allies and partners, who have common interest in region – former Israeli MP
Next Tanker “Kalbajar” to operate in external waters