Birthday of national dancer to be marked in Baku 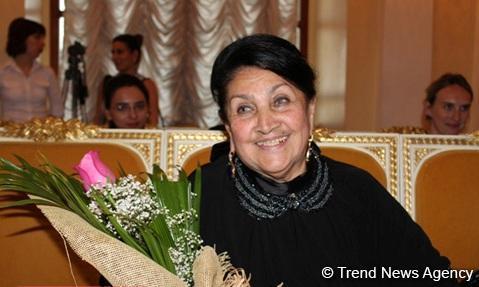 The 90th anniversary of the Azerbaijani artist, dancer and choreographer Roza Jalilova will be solemnly marked in Baku.

The event will take place in the Azerbaijan State Philharmonic Hall on May 17, Trend Life reported.

For more than 30 years, Roza Jalilova was representing Azerbaijan at many international festivals held in Canada, China, the U.S., Turkey, Iraq, Ethiopia and Morocco.

After graduating from the Baku Choreographic School in 1945, she became a soloist with the Opera and Ballet Theater in Baku.

In 1949, Roza was chosen as a soloist of the Song and Dance Ensemble of the Azerbaijan State Philharmonic Hall.

In 1989, Roza created the Gulustan Song and Dance Ensemble as well as Sevinj Ensemble.

In addition to Azerbaijani dances, her repertoire included Arab, Persian, Indian dances and those of other nations of the world.

Roza Jalilova brought honor to the country not only as a folk dancer, but also as a teacher at the gymnasium at the Azerbaijan National Conservatory, having trained many talented students.