“Buynuz” (Horn) carpets belong to the type of Karabakh carpets. They are produced in carpet-weaving points in Karabakh. Before Karabakh carpet masters called “Buynuz” carpets as “Horadiz”. In central Asia and Middle East also in Azerbaijan some animals such as sheep, ox, and goat were considered holy. Before characterizing farming, output, then totemism later related to astronomy horn meant different symbols and ideas. Bull is the symbol of power and courage as well as it symbolized “space forces”, God of water and farming. In the middle composition of the carpet consists of horn drawings. The middle part of these carpets creates horizontal raw by accepted rules, which consists of similar elements, ornaments. In one hand asymmetric structure of horns makes carpet more vivid, on the other hand creates opportunity to weave carpet how you want. Details in different forms comprising basic element of carpet are surrounding “Buynuz” has function such as filling.

Previous SOCAR: Trade between Turkmenistan and Azerbaijan has increased 5 times
Next Bulgarian media post articles on recent escalation in Karabakh region of Azerbaijan 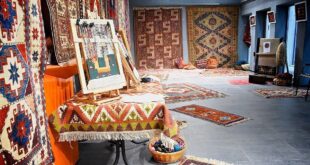