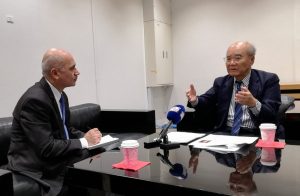 Matsuura said he has visited Azerbaijan six times in his position as a Director General of UNESCO. He noted that during each visit he has witnessed the rapid development of Azerbaijan in all areas.

K. Matsuura described national leader Heydar Aliyev as a powerful president who has done a lot for all-round development of his country. “The development strategy initiated by Heydar Aliyev and successfully continued by Ilham Aliyev led the country to great progress. Thanks to the successful leadership and steps effectively taken, Azerbaijan has turned into a venue where international events, sports competitions are held,” Mr. Matsuura underlined.

K. Matsuura also praised successful activities of the First Vice-President of Azerbaijan, UNESCO Goodwill Ambassador Mehriban Aliyeva in the international organization. He said that over the past years, a number of pearls of Azerbaijani culture were included in the lists of the Intangible Cultural Heritage of UNESCO at the initiative of Mehriban Aliyeva. He thanked the First Vice-President of Azerbaijan for the care and attention she paid to the preservation of cultural heritage as the UNESCO Goodwill Ambassador.

UNESCO Director General said he is confident that with his rich diplomatic experience and strong reputation President Ilham Aliyev will guide the country to a further successful and prosperous future.

Koichiro Matsuura conveyed cordial congratulations to the Azerbaijani people on the 31st of December – the Day of Solidarity of World Azerbaijanis and New Year, wishing continued unity and greater success.