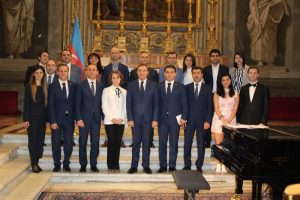 The 14th October edition of the popular “The Concerts at the Quirinale”, which are lively broadcast by Rai Radio 3 every Sunday at the Quirinale Palace, official residence of the Italian President, was dedicated to the concert of Azerbaijani music.

As stated, it was the first such concert live presented in the program of “Quirinale Concerts” to the large audience.

Prior to the concert, founder and host of “The Concerts at the Quirinale”, professor Stefano K. spoke of the centenary of the establishment of the Azerbaijan Democratic Republic and the 10th anniversary of mugham’s inclusion in UNESCO Representative List of the Intangible Cultural Heritage of Humanity, noting that the concert was jointly organized by the Heydar Aliyev Foundation, Azerbaijan National Commission for UNESCO, and Azerbaijan’s Embassy in Italy.

He, in particular, recalled the latest visit of President of Italy Sergio Mattarella to Azerbaijan and the visit of the first vice-president of Azerbaijan Mehriban Aliyeva to Italy, stressing that these visits strongly promoted development of cooperation between the two countries.

The concerts featured performance of pieces of Azerbaijani classical music by Belcan-Tar ensemble of the Azerbaijani and Italian musicians, as well as the Azerbaijani mughams and folk songs performed by “Karabakh” Mugham Group. The performances were cheered by the Italian audience.