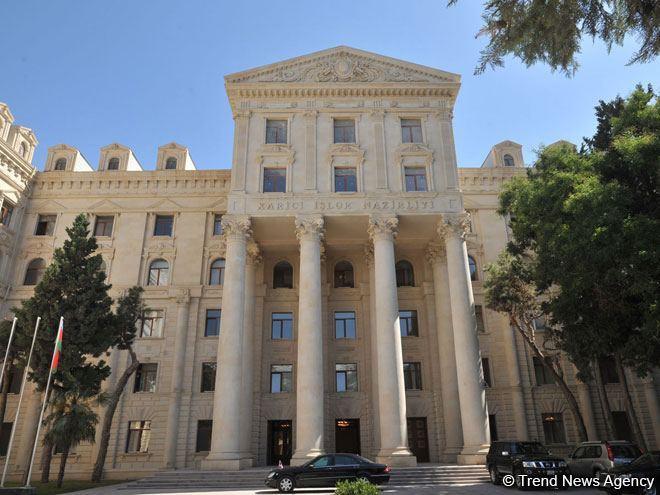 The ministry’s press service said this in a statement to comment on Russian President Vladimir Putin’s remarks on Nagorno-Karabakh made in an interview to Rossiya-24 channel on 17 November.

“Azerbaijan highly appreciates Russia’s efforts to resolve the Armenia-Azerbaijan Nagorno-Karabakh conflict. Russia is a permanent member of the UN Security Council and the only country out of the three co-chairing states of the OSCE Minsk Group that directly borders our region and has long-standing historical ties with it. This explains the direct interest of Russia in strengthening security, stability and peace in the South Caucasus,” the ministry said.

It added that the interview was “quite a detailed account of the important role that the mediation of the President of the Russian Federation has played in reaching agreements of 9 November of this year. The Russian President’s personal role and his signature under the trilateral statement of 9 November 2020 represent his extremely important contribution to the peace process and a guarantee of the irreversibility of this process”.

The ministry stressed that it fully shared the Russian president’s assessment of the cessation of the bloodshed.

“We fully share the assessment of Russia’s President that the cessation of bloodshed is an important achievement of the trilateral statement. The Azerbaijani side has always and completely supported the calls of the international community for a ceasefire since the first minutes of the war. In his interview, the President of Russia also touched upon the history of the settlement process,” the statement added.

“Of particular importance are the Russian President’s words that in terms of international law both Nagorno-Karabakh and all adjacent regions are an integral part of the territory of Azerbaijan. This position of Russia is based on a solid foundation of UN Security Council resolutions, decisions of the OSCE and other international organizations,” the ministry said.

It pointed out that the Russia president’s statement during the interview that the occupied territories of Azerbaijan were under the control of Armenia “is extremely important”.

“This testifies to the complete collapse of the attempts of the Armenian side to mislead the world community and bring to the fore the illegal regime that was created by Armenia in the occupied territories of Azerbaijan.  In the same way, the attempts of the Armenian leadership to expand the scope of the conflict and involve the Collective Security Treaty Organization have failed. In his interview, the President of Russia once again clearly and precisely stated that no one encroached on the territory of Armenia. Thus, the position of Azerbaijan was confirmed that all hostilities are taking place exclusively on the territory of our country, which was occupied by the armed forces of Armenia in the 1990s,” the ministry said.

The ministry’s statement stressed that “it should be especially emphasized that the President of Russia characterized the possible refusal of Armenia to fulfil the terms of the 9 November agreements as a ‘huge mistake’ and even as a ‘suicide”.

“We fully share this assessment. As the President of Russia wisely noted, the trilateral statement reached with the active support of Russia creates a good basis for normalizing relations in the long term,” the ministry added.

During the interview, Putin said that under international law, Karabakh has always been an integral part of Azerbaijan. He added If Armenia refuses the November agreements on the Nagorno-Karabakh settlement, it would be “suicidal”.  Putin stressed that Baku will determine itself where the joint Russian-Turkish monitoring centre will be located on its territory.

As part of its 44-day counter-offensive operations, the Azerbaijani army liberated several cities and nearly 300 of its settlements and villages as well as some strategic heights from the occupation of Armenian forces.