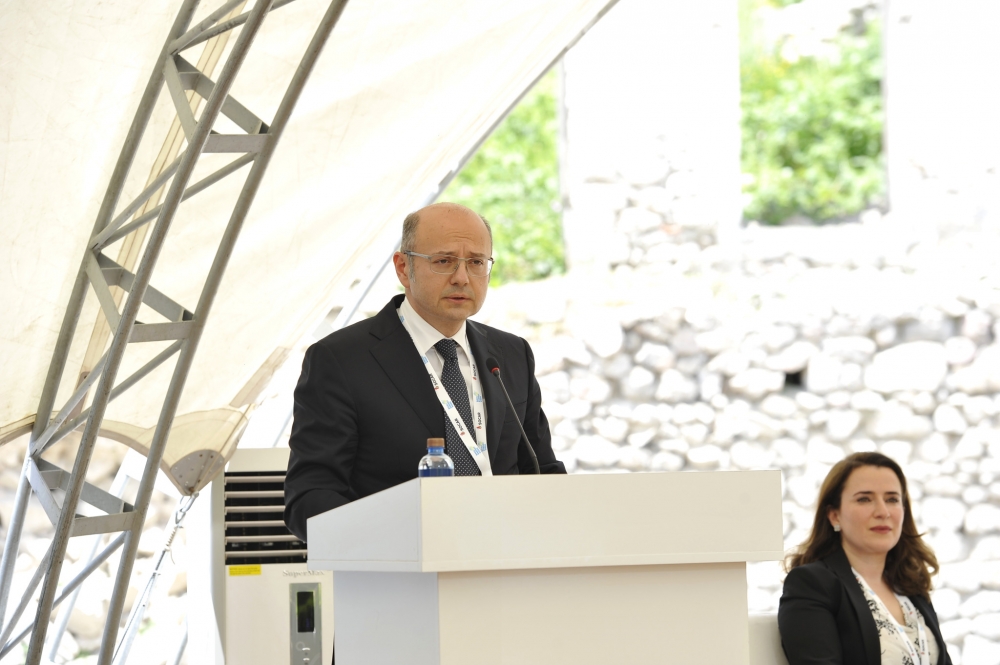 A special session of “Path to Net Zero: Development of Green Energy Potential of Liberated Territories” has been held in Shusha on the sidelines of the Baku Energy Week.

Making an opening speech at the session, Azerbaijan`s Minister of Energy Parviz Shahbazov said it was proud that this event was held in Shusha, which revived as the cultural capital of Azerbaijan and got back on its evolution track in the Year of Shusha.

Emphasizing that the city of Shusha, along with all its historical and moral values, is already a symbol of Azerbaijan, the minister said it demonstrates to the whole world its determination to revive these territories in a short time as it liberated its lands under the leadership of President Ilham Aliyev in just 44 days.

It was noted that 20MW power plants were put into operation as part of a large-scale restoration and construction process in the Karabakh and East Zangazur economic regions. This year, another 5 plants will be commissioned. 19 substations has been built and restored in these areas, including Shusha, and currently 7 new substations are under construction and 8 are planned to be built. Strategic goals are even greater: “Azerbaijan approaches the reconstruction of these territories in the context of modern challenges related to energy sustainability and support for the solution of the global climate change problem. The announcement by the President of Azerbaijan of Karabakh and East Zangezur as a Green Energy Zone with zero emissions is an example of an advanced development policy.”

Stressing that this region is ideal for the implementation of the Green Energy Zone concept, the minister underlined the cooperation with bp on 240MW solar energy in Jabrayil and that it’s planned to attract private and foreign investment to the construction of 83MW 18 small hydroelectric power plants and 150MW roof solar systems in the coming years. It was also emphasized that the commissioning of 140MW Khudaferin and Maiden Tower hydroelectric power plants, along with all this, new mega projects will contribute to the green development of the region.

“Shusha, which has been a source of spiritual energy throughout the history, is already becoming the center of the Green Energy Zone. Another confirmation of this is the choice of Shusha today as a place for signing a document of cooperation on 4 thousand megawatts wind and solar power projects. Most of these multibillion-dollar investment offers cover our liberated territories. This is a demonstration of the attractiveness of Azerbaijan and this region for investors and a great contribution to our energy system.”