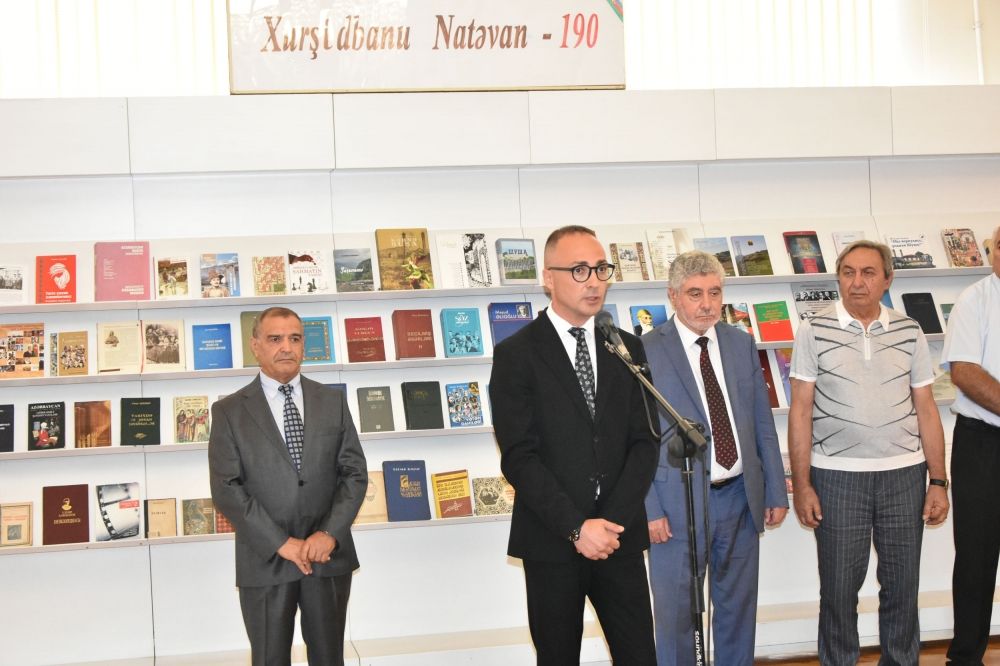 The Azerbaijani National Library has kicked off an exhibition dedicated to the 190th anniversary of Khurshidbanu Natavan, a great poetess and the daughter of Mehdi Gulu khan, the last ruler of the Karabakh khanate, Azernews reports via Azertac.

Mustafa Chemenli’s book “Neychun Gelmez” and Beylar Mammadov’s book “Khurshidbanu Natavan” published by Tahsil Publishing House were presented as part of the event co-organized by the Culture Ministry and the National Library.

Director of the National Library Karim Tahirov spoke about the rich artistic work of the 19th century poetess. Even during her lifetime, her poems were very popular and were distributed in the form of manuscripts.

In his speech, Karim Tahirov touched upon Azerbaijan’s victory in the Second Karabakh War.

“Thanks to the valor of the Azerbaijan Army, under the leadership of the Victorious Commander-in-Chief, President of Azerbaijan Ilham Aliyev, who liberated our lands from occupation in the 44-day Patriotic War, our dream has become a reality,” said Karim Tahirov.

He noted that the anniversary events will last throughout the year, covering Shusha, Aghdam, and other districts.

Speaking at the event, the head of the Department for Book Circulation and Work with Publishing Houses, Doctor of Philosophy in History Akif Marifli noted that Khurshidbanu Natavan is a role model for an Azerbaijani woman both in social activities and literary creativity.

Akif Marifli informed the event participants that the 190th anniversary of poetess will be celebrated in Shusha and other parts of the country in September.

He also reported on the restoration of the Majlisi-uns ( literary gathering in Shusha) and noted that a lot of work is being done to study the life path and creativity of Khurshidbanu Natavan.

The Director-General of the Institute of Manuscripts, Academician Teymur Karimli noted that Natavan, who is one of the strongest representatives of the Fuzuli literary school, played a big role in the development of the Azerbaijani language in the 19th century.

Holding the poetess’ 190th anniversary at the state level indicates that the Azerbaijani people attach great importance to their literature, art, and outstanding personalities. The academician expressed gratitude to the president for the high appreciation given to such great personalities.

The head of the department of the Institute of Literature, Doctor of Philology, Professor Islam Qaribli noted that the work of Khurshidbanu Natavan has always been in the spotlight.

He emphasised that tezkire (form of bibliographical dictionary) were written on Khurshidbanu Natavan’s 20 ghazals and such outstanding writers as Qasim bay Zakir, Mirza Fatali Akhundzada, Mir Mohsun Navvab and others wrote nazire (poem written by another poet in the same form) to her in their works, testifies to the high authority of the poetess. In conclusion, Islam Gharibli announced the publication of a monograph on Khurshidbanu Natavan in the near future.

Senior researcher at the Institute of Manuscripts named after Muhammad Fuzuli, Doctor of Philology, Professor Ragib Karimov said that Khurshidbanu Natavan was a person with a bright talent and committed to advanced ideas, occupying a worthy place in the history of Azerbaijani literature.

The literary majlis headed by her gathered leading representatives of the intelligentsia of that time and had a strong influence on the development of the literary environment of Karabakh.

Director of Tahsil Publishing House Tural Akhundov noted that the publication of two books about Khurshidbanu Natavan is a great contribution to the celebration of the 190th anniversary of the birth of the poetess.

Deputy Director of the National Library, Doctor of Philosophy in History Adiba Ismayilova informed in detail about the electronic information base “Khan’s daughter Khurshidbanu Natavan – an outstanding representative of the artistic thought of Azerbaijan”.

She said that the electronic information base consists of the sections “Attention of President Ilham Aliyev to the perpetuation of the memory of the Khan’s daughter”, “Main dates of life and work”, “Outstanding personalities about Khurshidbanu Natavan”, “Works”, “Filmography”, “Video gallery”, and “Photo Gallery”.

In conclusion, the participants in the event got acquainted with the exhibition “Khurshidbanu Natavan-190”.