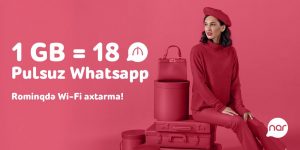 To get more information about the roaming packages visit nar.az website or send “R” to 777.