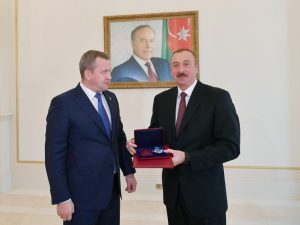 President of the Republic of Azerbaijan Ilham Aliyev has received a delegation led by acting Governor of the Astrakhan region of the Russian Federation Sergei Morozov.

Acting Governor of the Astrakhan region of the Russian Federation Sergei Morozov thanked President Ilham Aliyev for the warm words and reception. He noted that the Russian President Vladimir Putin gave instructions on expanding cooperation with the Caspian littoral states, emphasizing that he is pleased to pay his first visit to Azerbaijan in this regard. He thanked for the high hospitality shown to the delegation, noting that they were deeply impressed by the ongoing development processes in Baku. Sergei Morozov hailed the successful development of bilateral cooperation between Azerbaijan and the Astrakhan region in a variety of areas, saying that it contributes to the development of Russia-Azerbaijan bilateral relations.