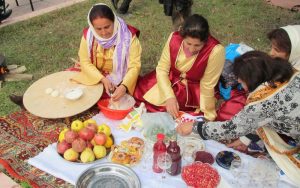 In Azerbaijan, always welcome guests. Whenever you come here, a warm and cordial welcome awaits you. But there are such festivals in our country that seem to be created to demonstrate the generosity of the Azerbaijani land and the hospitality of the people.

If you make a visit to such significant dates, you can get closer to the variety of Azerbaijani cuisine and purchase traditional delicacies.

Spring in Azerbaijan pleases with wonderful weather and a variety of generous colors of nature. Just at this time of the year, the Pilaf Festival is held in Baku with the participation of local and foreign chefs.

About 200 species of pilaf are known in Azerbaijan. During the festival, the best chefs from different regions of the country try to present to the jury and the audience of the festival their own versions of pilaf cooking. Here you will have to try more than a dozen types of this crown dish of Azerbaijani cuisine with the most delicate lamb, greens, chestnuts, apricots, cornel, raisins, traditionally served on a huge dish. In the spring, Sabzi-pilaf or green pilaf with juicy fragrant greens acquires special relevance. And the famous Shah-pilaf, claimed at any time of the year. This unusual pilaf is especially popular in the city of Ganja.

The name of this festive dish comes from its appearance, which resembles the crown of medieval oriental rulers. Unlike ordinary pilaf, Shah-pilaf served on the table, so to speak, “sealed.” That is, rice and side dish are baked together in a gazan (cauldron), the bottom and walls of which are covered with pita bread (Lavash). It turns out something like a big cake, filling for which is fragrant smoking pilaf.

Every summer, the International Festival of Dolma takes place in the capital or in one of the regions of Azerbaijan. During this large-scale and colorful event, Azerbaijani and foreign chefs present hundreds of varieties of dolma to the attention of a professional jury.

Note that Azerbaijani dolma is included in the UNESCO List of Intangible Cultural Heritage. Dolma is loved and able to cook in almost every Azerbaijani family. This simple and at the same time delicious meal can be a part of both a daily meal and a festive meal decoration.

There are many varieties of dolma, but the most common in Azerbaijan are dolma from grape leaves (yarpaq dolması), dolma from cabbage leaves (kələm dolması) and eggplant dolma (badımcan dolması).

Of course, the festival participants are happy to offer dolma for tasting to visitors whose admission is free. Thus, the guests have a chance to get acquainted not only with classic types of Azerbaijani dolma, but also with such exotic varieties as dolma made from apples, potatoes, onions, cucumbers, etc.

The festival is accompanied by an interesting and diverse concert program with the participation of artists and folk groups.

The fertile land of Azerbaijan in the season gives people a rich harvest of juicy berries, fruits and vegetables that they want to keep for a long time. For this, humanity came up with such a delicacy as jam. Hundreds of varieties of jam are prepared in every region of Azerbaijan. But only one city – Gabala, in 2017 was awarded the title of the International Capital of Jam. The corresponding certificate was presented to the head of the Executive Authority of this region by the President of the World Culinary Organization, Tomas Gugler. This momentous event took place during the annual International Jam Festival, which is held, of course, in Gabala!

Famous chefs from all over the world who come here not only get acquainted with Azerbaijani types of jam, but also demonstrate their own unusual types of this delicacy.

Moreover, along with quite traditional types of jam, for example, from strawberries, apricots, plums, blackberries, quince, cherries and other common fruits, you can see truly exotic varieties at the festival, which are sometimes unknown even to experienced chefs. How do you find jam from pepper, ginger, mint, dandelions, pumpkin seeds, rosemary, beets, spruce cones and other ingredients unusual for making desserts ?! Have not tried? Then Gabala is waiting for you!

Every autumn in Baku another significant event takes place, which can not leave any gourmet indifferent – Honey Fair! Of course, this is not a festival, but the atmosphere here reigns quite festive. After all, not every day beekeepers from all regions of the country and from abroad can personally present their products to interested buyers.

The format of the fair allows you to gather the best beekeepers from different regions of the country under one roof. So last year, more than 320 beekeepers participated in the fair, bringing about 300 tons of honey! Including such popular honey varieties as lime, flower, chestnut, buckwheat, acacia, clover, forest and many others. In addition to the honey itself, bee milk, bee venom, pollen, propolis and other beekeeping products can be purchased at the fair.

Having visited the fair, you can try any beekeeping products presented on it, choose and purchase the ones you like. Strict selection of participants and a special laboratory for checking the quality of purchased products guarantee the authenticity of the products presented.

Autumn in Azerbaijan – what could be more tempting for lovers of generous gifts of nature?! Its beginning is marked by the ripening of fragrant apples, the champion of the cultivation of which is considered to be the Guba region of Azerbaijan. It cultivates the largest number of apple varieties, the best of which are shown during the Apple Festival, in early October.

Farmers try to outdo each other, presenting to the public the largest, most fragrant, sweet apples And cooks demonstrate a wide range of dishes that can be prepared using these widely spread and healthy fruits. Apple jams, pies, juices, sweets – this and much more you will have to try if you come to Guba on a festive day.

On the International Cook Day, on October 20, the International Bread Festival was once held in Baku. This event has all chances to become traditional. Bread is essential in the food culture of any nation, and a variety of Azerbaijani bread like Lavash in 2016 is included in the UNESCO Intangible Cultural Heritage Representative List. Each region of Azerbaijan has its own variations of Lavash: somewhere it is thinner or thicker, round or rectangular. But the essence of this does not change – it is easy to prepare, but very tasty and nutritious type of bread.

During the festival one can observe more than five hundred varieties of traditional Azerbaijani bread, bakery and flour products. Guests are given the opportunity to familiarize themselves with the traditions of harvesting and production of bread, as well as to taste fragrant bread with cheese, butter, honey and tea.

October-November is the time of ripening of pomegranates, amazing in taste and usefulness of fruits, with scarlet juicy grains. The Goychay district is considered the center of pomegranate cultivation in Azerbaijan. It was the Goychay pomegranates that won world recognition and became synonymous with “real Azerbaijani pomegranates”. The secret of the great taste and stable quality of these pomegranates is the unique microclimate and composition of the soils of the region, which are not found anywhere else in the world. It is not surprising that all known varieties of this “paradise fruit” are cultivated here.

As you have already guessed, the Pomegranate Holiday is held in Goychay between the end of October and the beginning of November, which attracts a lot of tourists. During the festival, gardeners demonstrate different varieties of pomegranate, as well as juices, jams, sweets, pies, etc., made from it.