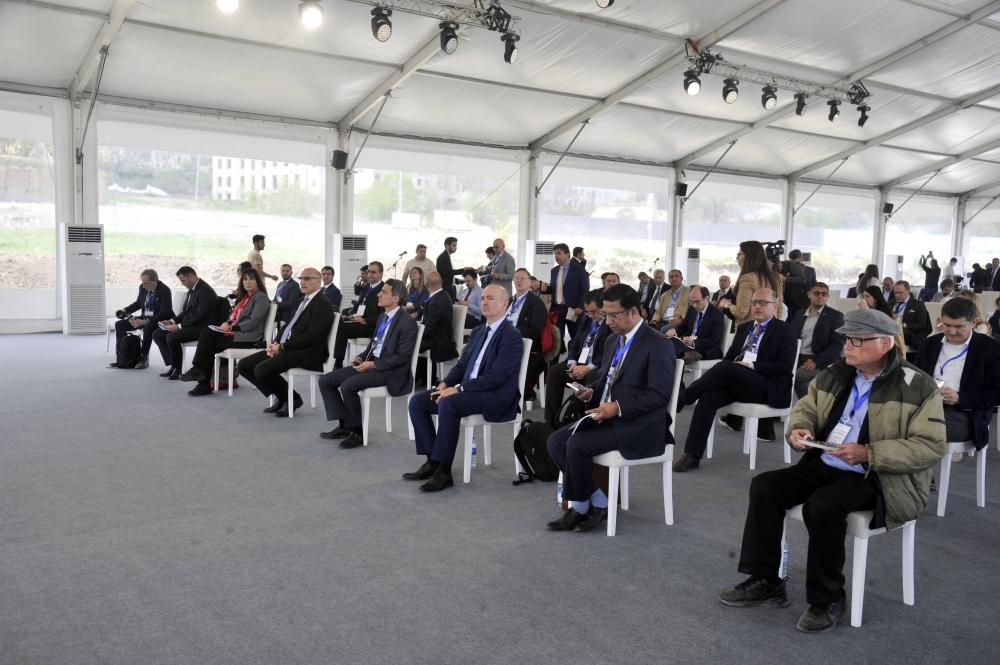 Azerbaijan’s historical Shusha city, like the country’s other liberated regions, is undergoing an extensive rebuilding process to restore normal life in the city and to return its previous glory after a long-lasting devastating occupation by Armenia.

Azerbaijan organizes massive political, humanitarian, and cultural events in addition to large-scale reconstruction to draw international attention to the destruction and humanitarian tragedy perpetrated by Armenia in Azerbaijan’s former occupied lands, as well as to inform the world about its reconstruction and peace-building efforts in the region.

The Shusha city has hosted numerous big international events and witnessed a number of historic occasions since its liberation from Armenia’s 30-year occupation in 2020.

An international conference titled “South Caucasus: Development and Cooperation”, organized by the Center for International Relations Analysis and ADA University in Shusha on April 28, was one of the most recent major events to highlight Azerbaijan’s peace-building efforts to the international community.

Experts, researchers and media representatives from about 50 foreign think tanks representing over 20 countries attended the forum to discuss the peace agenda formed by Azerbaijan to normalize ties with Armenia as a basis for the development of relations between the South Caucasus countries in the post-conflict period, the opening of communications, the region’s progress, security and prosperity.

The delimitation of borders, as well as the signing of a peace treaty that recognizes territorial integrity and sovereignty, are key concerns on the region’s agenda.

The question of establishing communications follows as integration is impossible without it. All of these responsibilities are necessary for Azerbaijan and Armenia to maintain lasting peace and mutual understanding, and hence for peace in the South Caucasus as a whole.

All additional considerations should be made within the context of these core duties. This is what Azerbaijan attempted to communicate to the Shusha forum attendees.

From the opening minutes, it was evident that Azerbaijan intended to have a substantial dialogue with representatives from important international think tanks and the media, and the easiest method to demonstrate what will be said is to familiarize the participants with the current situation. Thus, simply mentioning the mine danger left over from the Armenian occupation is insufficient to grasp the magnitude of the situation.

Initially, the forum participants landed at Karabakh’s Fuzuli International Airport, which was constructed in less than a year, making it the fastest-finished big project in the liberated territories. This airport alone exemplifies Azerbaijan’s tremendous potential and commitment to quickly restoring its liberated regions. This modern and stylish airport is located in the territory of total destruction and is a symbol of the future revival and prosperity of the liberated lands.

After familiarizing themselves with the airport, the delegation observed the demining operation in Fuzuli region before traveling to Shusha via the Victory Road, which was also launched as part of the grand reconstruction that kicked off in the liberated lands after the 44-day war with Armenia.

All of this acted as a visual help in preparation for the next debates on the mine danger, which would take place on April 29.

The organization of discussions in Shusha allows foreign experts who are involved in the region to better consider the realities, see firsthand the consequences of the Armenian occupiers’ urbicide, ecocide, and cultural genocide, and obtain detailed information about post-conflict changes, restoration work, and plans.

Infrastructure projects in Azerbaijan’s liberated lands, particularly Shusha, are considered at panel talks. One of the key issues was the attainment of final peace, communication unblocking, and regional integration possibilities.

In his opening remarks at the forum, the president’s special representative in Shusha, Aydin Karimov, stated that Shusha had hosted a number of major events in the past year and such events significantly contribute to the future regional development and long-term peace.

Presidential aide Hikmat Hajiyev emphasized Shusha’s importance for Azerbaijan, noting that the government is working on large-scale infrastructure projects there.

He said that the region is currently excessively fragmented, so it is necessary to build more connections, and more contacts between people. Azerbaijan, for its part, is ready for this process, and now it is up to Armenia to follow suit.

The presidential aide stressed that the Azerbaijani army did not use any artillery or heavy arms during the 44-day war to liberate Shusha, and the battle ended with Azerbaijan’s victory after the liberation of the city. Hajiyev highlighted the importance of resolving the issue of delimitation and demarcation of the Azerbaijani-Armenian borders.

Assistant to the Azerbaijani First Vice-President Elchin Amirbayov stressed that Baku is ready to work both in existing formats and on any new platforms for establishing peace in the South Caucasus and called on other countries to influence the acceleration of the peace process.

Addressing the event, the president’s special representative in Karabakh, Emin Huseynov, emphasized that Armenia still refuses to provide Azerbaijan with maps of mined areas. Huseynov said that the accuracy of the mines maps provided by Armenia is 25 percent, and mines still put an end to human lives in the liberated lands. He noted that since the end of the war, over 150 people, including young people, civilians and members of the media, have been killed by landmines.

Since 1992, nearly 35,000 people have been killed or disabled by landmines, according to Huseynov. He stated that Azerbaijan’s mine problem must be solved and that Armenia’s distribution of precise mine maps will build long-term mutual trust between the two nations.

Huseynov also drew the participants’ attention to the fact that the Karabakh conflict is over, and Baku is giving Armenia a chance to join the regional integration process before it’s too late.

Furthermore, the participants discussed post-war construction and restoration in the liberated lands The panel discussed how Azerbaijan should implement important infrastructure projects that will help rebuild the Karabakh region and its future prosperity. They also discussed ensuring lasting peace in the region, eliminating traditional rivalry and other issues.

It was noted that Azerbaijan has created a new reality in the region after the 44-day war in 2020, and this reality demonstrates its importance in maintaining regional stability and economic development.

The Shusha forum, according to Daniel Pommier Vincelli, a scholar at the University of Rome Sapienza, is a highly important event, with the participation of representatives of various countries studying the history and geopolitical situation in the South Caucasus.

“Today we are talking about peace and development in the post-conflict period at this forum, we share our views. This forum in Shusha is an important message from Azerbaijan to the international community,” he said.

Moreover, the panel discussed post-conflict regional cooperation and international relations in the region, as well as current and future opportunities in this regard. It was noted that Azerbaijan and Armenia must work together to eradicate inter-ethnic tensions and bring peace to the area.

Azerbaijan is increasingly educating the rest of the globe about the new realities. Despite the fact that certain nations’ representatives continue to try to paint a misleading picture of the conflict and its repercussions, the world has recognized the new realities of the region, as President Ilham Aliyev stated previously. The recent UN event in Shusha, as well as countless trips by international delegations, diplomats, specialists, and media to the liberated regions, attest to this.

The current conference is another step toward fully legitimizing Azerbaijan’s victory in the international community’s minds. Baku is pursuing its agenda without hurrying anywhere, shattering Armenia’s objectives as they emerge.

The strategy for informing the international community about Armenia’s deeds was well-chosen. Hundreds of international journalists, specialists, diplomats, and public personalities documented what the Armenians did in the Azerbaijani regions they held for over three decades. Large events, such as the Shusha forum, which drew representatives from dozens of countries, were well-planned in this sense.

On April 29, discussions on the threat of mines and issues relating to the return of IDPs are taking place at ADA University in Baku as part of the forum.

The Shusha forum is a logical continuation of the international conference “New vision for South Caucasus: Post-conflict development and cooperation” held on April 13, 2021, at ADA University.

At that conference, the participants proposed to hold an international forum in Karabakh, which was welcomed by Aliyev. The current Shusha Forum should be evaluated in terms of the implementation of this proposal.

The main purpose of the Shusha international forum is to contribute to the development of relations among the South Caucasus countries in the post-conflict period.

The forum addresses issues such as regional communication line unblocking, regional security and prosperity goals, all of which are based on Azerbaijan’s peace program for normalizing ties with Armenia.

The Shusha international forum provides an opportunity for foreign experts representing the world’s leading think tanks, who are closely interested in the region, to see the realities, to get acquainted with the urbicide, cultural genocide, and ecosystem, to assess the humanitarian aspects of the mine problem.

At the same time, it will provide detailed information on Azerbaijan’s restoration and construction work and plans in the liberated territories.

The nefarious techniques, such as portraying Shusha as an Armenian city over the years, failed due to Shusha’s status as the main venue for events of the UN and other influential organizations.