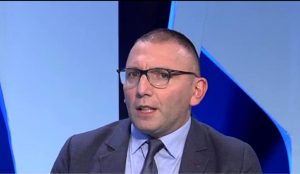 Written by political analyst Arye Gut, the article says: “The Israeli defense company Elbit manufactures drones for Israel’s military. Elbit Systems has sold Azerbaijan its latest unmanned aerial vehicle, which is capable of long-range, precise, tactical kamikaze strikes. It has now sold its SkyStriker drone, which can destroy a target on impact, to Azerbaijan. This makes Azerbaijan the first country outside of Israel to receive the drone.

According to the Stockholm International Peace Research Institute, Azerbaijan as was third-largest purchaser of Israeli arms in 2017 ($137 million). Prime Minister Benjamin Netanyahu, during his official visit to Baku in December 2016, revealed that Azerbaijan had up to that time bought $5 billion worth of Israeli weapons.

Presently, the friendly and trusting ties of cooperation and partnership of the State of Israel and Azerbaijan represent a true and ideal model for most countries in the world. In the most difficult times, these countries have always been together and always offered mutual support.

One of the main reasons for this strong relationship is the human factor – a long and close fraternal friendship between Azerbaijanis and the Jewish community living in Azerbaijan.

Unlike many cultures, Azerbaijanis have never viewed Jews as foreign or alien. Israelis with roots in Azerbaijan for many years are doing a great deal to foster the emerging economic and even geopolitical cooperation between Azerbaijan and Israel. The Jewish people have lived in the territory of Azerbaijan for over 2,600 years and have never experienced harassment, insults, pogroms or antisemitic actions. Thus, the relationship in almost all fields of life between the two states is at a sufficiently high level.

Another company, Israel Aerospace Industries, reportedly has in the past sold its own Harop drone to Azerbaijan, which has not tried to conceal its use of them to surveil movements in Nagorno-Karabakh, an integral part of Azerbaijan that has been occupied by ethnic Armenian military forces since the late 1980s. The military-technical partnership between Israel and Azerbaijan is actively and permanently developing and strengthening. In recent time, some Israeli media, with the help of some representatives of the Armenian lobby in Israel, have been trying to spread false information about the “problems” in Israeli-Azerbaijani military cooperation.

After the events of April 2016, during a rapid counter-offensive, the Armenian side’s front defense line was broken in multiple places and the Azerbaijan Army recaptured several strategic heights and inhabited places. We actually have seen anti-Israeli hysteria and antisemitism in Armenia. Even in Israel the Armenian community held rallies against the Azerbaijani-Israeli partnership.

The military agreements signed between the two countries, worth about five billion dollars, granted Azerbaijan better technology. Israel is very important for Azerbaijan, not only an economic and political partner, but also as a strategic partner on security, geopolitical and military issues.

Concerning the criticism of Armenia on Israeli-Azerbaijani military cooperation, it is necessary to emphasize that Azerbaijan and Israel choose their friends and partners themselves, and they determine the level of strategic cooperation and partnership in the military-technical field. Moreover, no one has the right to interfere with these partnerships.

The worst atrocity took place on February 26, 1992, when Armenian forces perpetrated an act of genocide against Azerbaijani civilians in the town of Khojaly. The bloody massacre that transpired in that small Azerbaijani town was also a crime against humanity. Armenian armed forces have committed unspeakable atrocities and barbaric acts – 613 people were killed, 487 people were crippled, and 1,275 civilians – men, women, children and the elderly – were captured, murdered, raped and tortured. Most notably, the mass extermination of the civilian population of Khojaly was carried out for one reason: all were Azerbaijanis. International journalists and an official Azerbaijani investigation reported disfigured corpses, dead women and children, and the murder of fleeing civilians.

It is a historical fact that no country in Eurasia has closer or warmer ties with Israel than Azerbaijan. The relationship between the two countries is particularly surprising because Azerbaijan is a majority-Muslim secular country. Israel has always been attracted to Azerbaijan, not only because there is no antisemitism in that country, but also because Baku has repeatedly denounced manifestations of antisemitism elsewhere. This mutual attraction is especially true given the dramatic and continuing expansion of economic ties between Israel and Azerbaijan.”