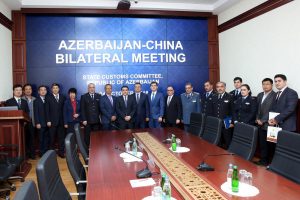 A meeting with representatives of Chinese companies operating in Azerbaijan has been held at the State Customs Committee (SCC), the committee said in a statement Oct. 25.

Huseynov noted that the friendly cooperation based on friendly relations has been established between Azerbaijan and China, which is developing dynamically.

During the meeting, the constant growth of trade turnover between the two countries was emphasized, which is a positive indicator of ties in the economic sphere.

The Advisor to the Chinese Embassy in Azerbaijan on trade and economic affairs, Wang Chungan described Azerbaijan as a traditional friend and partner of China, a strategic country located on an important transport corridor.

It was noted that in recent years, the relations between the two countries have been developing in a healthy and stable form, the mutual fruitful cooperation in the economic, commercial, energy, humanitarian and other spheres has been deepening.

The Chinese diplomat noted that, thanks to the policy pursued by President Ilham Aliyev, Azerbaijan has achieved political stability and social security, an active investment environment has been formed, and the important steps have been taken to attract foreign investments. Wang Chungan also praised the work of the customs authorities of Azerbaijan in this direction.

At the end of the meeting, the opinions and suggestions were heard, and the questions of Chinese businessmen were voiced.

Previous Azerbaijan, Turkey have enough will and resources to implement more than one major project
Next Vice Speaker: There is great potential for cooperation between Estonia, Azerbaijan