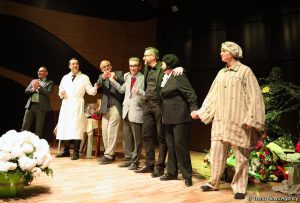 A play “In Search of Meaning” directed by Ilgar Safat  has been premiered at International Mugham Center.

“In Search of Meaning”  is based on the play of the same name by Israeli writer and playwright Ido Netanyahu.

The premier of the play was held with great success, Trend Life reported.

The spectators greeted the creative team with a storm of applause. The creative team included folk artists Lyudmila Dukhovnaya and Mabuda Maharamova, actors Azer Aydemir and Rumiya Agayeva, who brilliantly perform on the stage of Mugham Center.

Author of the play Ido Netanyahu is the son of the famous historian Benzion Netanyahu and brother of Israeli Prime Minister Benjamin Netanyahu, who together with his spouse came to the premiere from Jerusalem.

At the opening of the evening, well-known expert in the field of international relations, head of the Baku International Center for Multiculturalism in Israel and Israeli organization International Projects for Society Arye Gut said that the play of the Israeli playwright was presented for the first time in Azerbaijan.

“Azerbaijan has been and remains the homeland for representatives of many religions and peoples, a vivid example of multiculturalism and tolerance for many countries. Historically there was a fraternal attitude towards the representatives of the Jewish community of the country. This is our second home. The performance is another bridge of culture between Azerbaijan and Israel,” he said.

Director Ilgar Safat stressed the importance of the project, which was staged with the assistance of the Narimanfilm film studio.

“The play tells about a famous psychologist, an eminent scientist Victor Frankl, who went through the horrors of the Holocaust, survived in four fascist death camps, and created such a powerful direction in psychology as logotherapy. The tragedy of the Holocaust is very close to the Azerbaijani people, who survived the Khojaly genocide,” he said.

Israeli Ambassador to Azerbaijan Dan Stav emphasized the high level of relations between the countries.

“Azerbaijan is historically a tolerant country where people of the Jewish community, all citizens, regardless of nationality and religion, are highly respected. There are strong ties between the Jewish and Azerbaijani people that were laid many centuries ago and today play an important role in further strengthening relations between our countries. I would also like to note the great contribution of Azerbaijan to the victory over Nazism and fascism in the years of the Great Patriotic War, when more than 350,000 brave sons and daughters gave their lives for the sake of a peaceful future,” he said.

After the premiere of the performance, Israeli writer and playwright Ido Netanyahu expressed his gratitude for the warm welcome.

“Within a few days of being in Azerbaijan, I personally became convinced of the beauty of Azerbaijan, its ancient and modern architecture, the original culture and traditions, tolerance and hospitality of the people, ” he added.